Xiao Gin looked down at her right hand and rubbed the scar on her thumb. It’s maybe an inch long, skinny and isn’t noticeable unless she points it out. It’s a reminder of where she’s from, but at the same time, has paved the path to where she’s heading.

Her story began on the doorstep of a Chinese orphanage about 17 years ago and has led her to Oregon State, where she will enroll as one of five incoming freshmen on the Beavers softball team this fall.

No one knows the actual day Gin was born and little is known about her birth parents. But at some point in 2002, a woman gave birth to a little girl. Six months later she was found abandoned on the doorstep of an orphanage with only a note, no birth certificate and an extra finger on her right hand.

In China, abandoning a baby is illegal. In her first year, she shared a crib with two other infants. She had to fight for attention and crib space. If it wasn’t for that, she may have never been found by Dick and Sue Gin from San Luis Obispo, Calif.

“We don’t actually know her birth birthday so we celebrate her adoption day as her birthday, which is August 2, 2002,” said Dick.

Dick and Sue already had a son and daughter, but yearned for more children. They decided to adopt, which led the Chinese-American family to China.

The process was filled with background, financial and medical checks. They had to provide references. It took 18 months for them to go there, pick up their baby and come home.

They brought the newest member of their family home, where she was immediately surrounded by sports. Both of her parents are athletic trainers and her siblings played in local youth leagues.

Gin’s older sister, Kacie, played softball and was a pitcher in the local youth league. She would follow her sister and dad whenever it was time to practice and would try to imitate her.

Dick was the president of the local recreational league in town and had to create an age group to get her started in six-and-under.

Her parents recognized how gifted she was athletically. She could throw, catch and hit better than most of the kids her age. When she was five, she was placed on a 10-and-under all-star team. Gin and her dad laughed when they told the story about the coach giving signs that corresponded with the armband.

“We were down in San Diego, coach puts her in to run and is giving signals,” Dick laughed. “She can’t read! She can barely recognize the letters! She was just staring at the wristband.”

It was the car rides to and from practices and tournaments when she would ask questions and really think about the life she’d been given. She was 11 when it really hit her and the family had a sit-down talk.

“They’ve always been my parents. I didn’t know,” she said. “I would say some things in a social setting and they would pull me aside and tell me quickly, but I never really comprehended it until I was 10 or 11.”

When she was 12, it was time to look for a serious travel softball team, and in 2016, she found a summer home with the California Suncats.

Head coach James Jimenez recognized her potential and had her playing up an age group. She mostly sat and would come in as a substitute player, but little by little, she took over a starting role at shortstop and pitcher.

“Her athleticism and her work ethic,” Jimenez said to describe how Gin stood out to him. “She’s always practicing. She has a tough job, not only is she a pitcher, but she bats from the left side so she has to work on her slapping and hitting. She’s such a dynamic player, I’d pick her No. 1 over everyone.”

When it came time to begin the recruiting process, Gin relentlessly sent emails to Oregon State. According to assistant coach Marcie Green, it was her fighter instinct and versatility that grabbed their attention.

“We didn’t know her story at all, but after hearing it from her parents, it all makes sense,” said Green. “The fight, the battle, come see me, come watch me play, just nonstop and it got our attention. There’s got to be something in there that creates that will to succeed and to be the best and to overcome. I think through her experience, she’s used that as motivation in her whole life to be the best she can be.”

In September 2017, Oregon State responded and came to watch her with the Suncats. She went to a camp in Corvallis, Ore. and was offered a scholarship on the spot. She verbally committed at the age of 15.

“Coach (Laura) Berg being an Olympian was huge,” Gin said about why she chose OSU. “I feel like I can learn a lot from her and the staff is just loaded. I really saw myself being there and especially with Corvallis being a really welcoming town. It’s the best college town in the Pac-12 and it’s about the size of San Luis Obispo. I wanted to be in a small town, and the campus is beautiful.”

She has her mind set on majoring in kinesiology, but the first day of class will come sooner than she originally planned.

Green contacted Gin this past winter while Gin was in soccer season and proposed the question of graduating early. Gin considered it, sent in transcripts and was accepted.

“The hardest part was getting out of high school,” she laughed. “They didn’t want to let me go.”

Jimenez is also struggling with the thought of letting Gin go so soon.

Oregon State's Mariah Mazon Is Ready For Her Big Moment

Oregon State's Mariah Mazon is primed for a breakout campaign in 2020.

“When she told me she was going to graduate early, I was the happiest coach on the planet,” he said. “I know her story and she’s one of those kids that my pastor would call a treasure out of darkness. I just visualize what she went through as a kid being adopted and her parents totally love her. It’s totally amazing. To see her reach her goals and her dreams of being a Division-I athlete hits me hard and affects me today.”

While waiting to hear from the high school, Dick began converting a cargo van into a camper. There’s a stove, a mini fridge, a bed, a sink and a toilet. It’s solar powered and is used as their home while traveling. They will get their daughter an AirBnb or hotel room so she has a place to shower, sleep and study.

When her high school finally gave her the green light, she quickly realized that her summer plan of only playing softball was now going to be filled with taking classes and doing homework while fitting softball and workouts in throughout the day.

Gin wakes up around 8 a.m. every day and eats breakfast before getting started on her homework. She is taking English, Economics and Intro to Chemistry this summer. She goes to the gym around 12:30 p.m. for about an hour then comes home to eat lunch before doing another round of schoolwork.

On Tuesdays and Thursdays, she goes up to the softball field with her dad and then comes home to eat dinner and does her last batch of assignments for the day.

She will graduate from high school at the end of July and enroll at OSU in August.

“The past six months have been crazy just because of the graduating early and the double workload,” said Dick. “She’s got incredible drive and it’s been one of her goals since we started this journey. She’s done all the work, we are just guiding her down the track. She’s stayed on the path the whole time.”

So as the summer winds down and her days in SLO quickly turn into days in Corvallis, Gin will look around and know that her past has shaped her into the woman she is today. Being the youngest on the team won’t be anything new to her.

“It’s an unbelievable tale,” said Jimenez. “How much more can she accomplish? She’s going to be fighting for a starting position in Division-I softball with women who are five years older than her. If anybody can do it, it’s her. Because adversity, she thrives off it and she’s the only girl I know who can do that.”

Six months after she arrived in the United States, Gin had her extra finger surgically removed. The result was a scar on her throwing hand. A hand that has earned her a scholarship and has allowed her to chase her dreams. 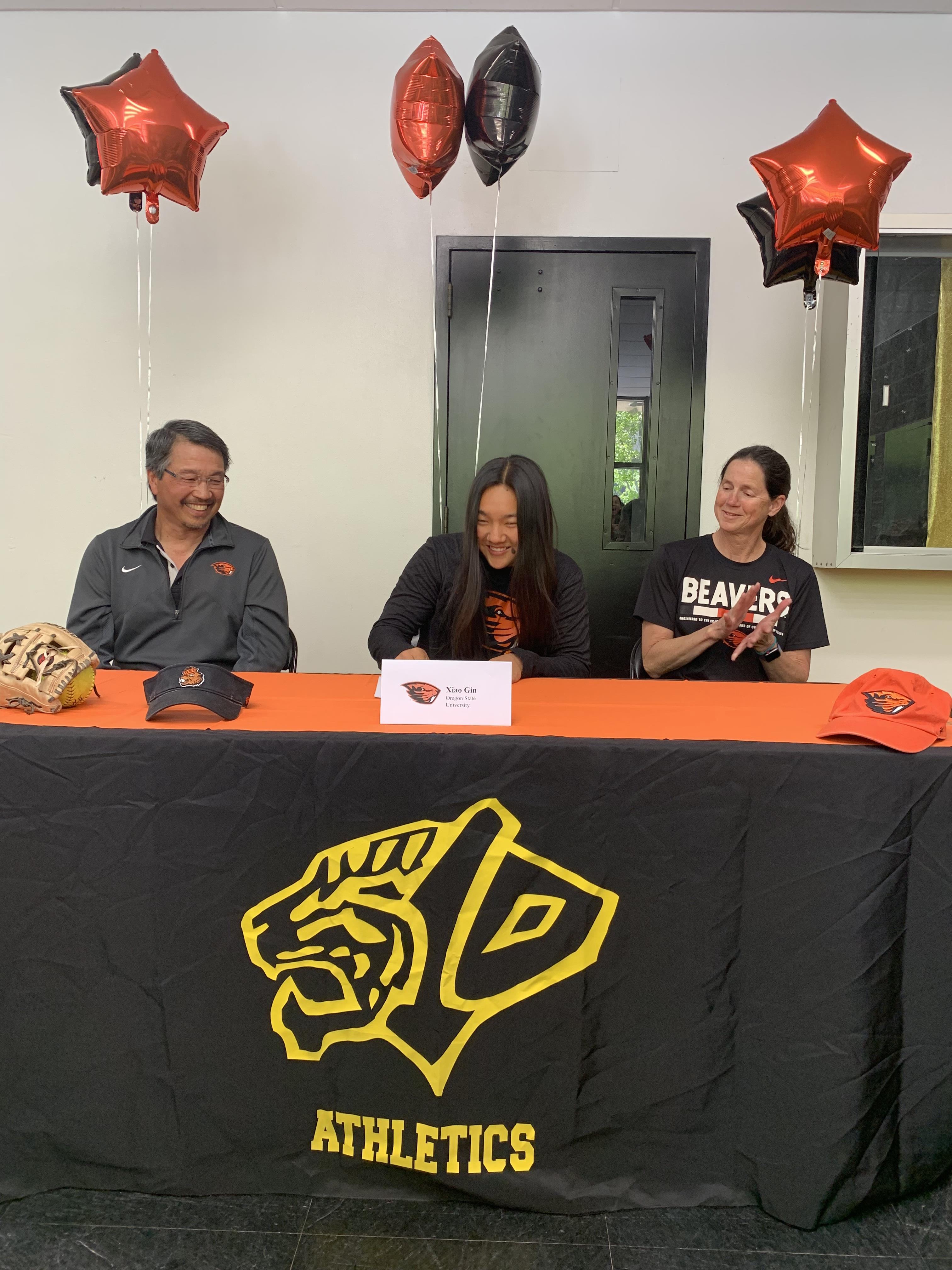