On Sunday, the University of Mississippi announced the resignation of head softball coach Mike Smith after an internal investigation. The circumstances of the move remain mysterious and Softball America has learned about a heated dispute between a player and her family about guaranteed scholarship money—or lack thereof—and a quest to force Smith out when the money wasn’t awarded to the player.

The University’s investigation began in mid-October after a student-athlete’s parent contacted Softball America prior to the student-athlete, her roommate and her parents contacting the Ole Miss athletic department. The parent requested to remain anonymous and asked that SA look into an “issue between their daughter and Smith.”

The player’s exit meeting following the 2019 season didn’t go according to plan, the parent said. The player is a walk-on and the family believed she was deserving of a scholarship after her success with the program.

She wasn’t given guaranteed money and things escalated quickly.

“He burnt his bridge with me,” the parent told an Ole Miss booster—who also wished to remain anonymous—in a phone call on Oct. 14. “I’m a vindictive son of a b----.”

When pressed about the alleged incident on the first call, the parent said he never saw Smith touch his daughter, but his daughter told him that Smith put his hands on her waist to move her aside when passing through the dugout during a game.

On Tuesday, Softball America gave the parent an opportunity to comment on the alleged incident again.

“There were some allegations that came out that as a father had me fired up but I didn’t act on it,” they said. “I never had any contact with any administration, any coaches, any of the players other than saying hi to my daughter’s two roommates.”

Softball America learned that after the complaint, players were called in for interviews with Ole Miss compliance, Title IX investigators and a third party.

Ten different parents spoke with Softball America since mid-October. Each one expressed their support of Smith and said how difficult the time has been for their daughters since the investigation started.

Several parents told Softball America that their daughters were asked three questions in their interviews: Have you ever seen Coach Smith inappropriately touch anybody? Do you have enough time management? Has Coach Smith ever asked or gotten mad at you because you were hurt?

A current player said she told the investigators that they were crazy for launching the investigation and that nothing foul had occurred.

“This was a witch hunt,” the current player said. “I’m sorry that three people can’t handle their ways or not get scholarships … but this is bullsh--. I’ve got plenty of time. I have six hours of study hall. It’s not like we are on the field all the time. We don’t have practice or weights on Mondays. (As far as playing hurt) Coach Smith modifies things and won’t play someone unless the trainer clears us.”

As Softball America dug further, it became apparent through interviews that the student-athlete who was denied scholarship money recruited two other players to join her side. According to two current players, those three addressed the team after a team meeting in hopes of recruiting more players to side with them in order to get Smith fired.

One of the fathers of a current player spoke to SA on Monday night and requested to not be named for fear of retaliation from administration.

“This is the biggest travesty I’ve even seen,” he said. “This was done by pure evil.”

SA obtained a copy of an email from Deputy Athletics Director and Senior Women’s Administrator Lynette Johnson to the team telling them that she would discuss the findings of the investigation prior to the team’s Christmas party. 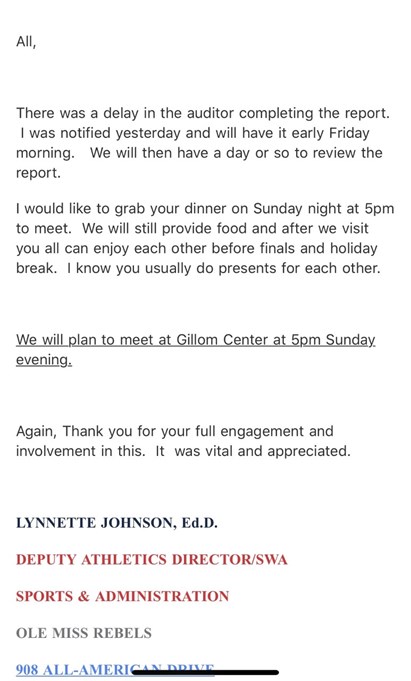 That never happened before the party as the team found out Smith resigned via Twitter.

“They never discussed anything,” a parent said. “The only thing Lynette said was that (we) are doing the best thing in the interest of (you) girls.”

“We will not discuss personnel matters,” Johnson told Softball America via email when asked about the investigation. SA attempted to contact Johnson again on Tuesday evening, but as of Wednesday morning Johnson hadn’t responded.

“Ten families called Lynette Johnson in one day. (I know for a fact) because she told me that,” the anonymous father said. “She knew in her mind from day one that Mike was gone. That lady should be fired. She has no business (if that’s her train of thought) without looking at all the evidence. She didn’t do her due diligence as an administrator to go and find everything she needed to find out.”

Other evidence that was considered in evaluating Smith was a suspension from the opening weekend of 2019. Smith self-reported having a recruit on campus during a recruiting dead period.

The Ole Miss Spirit reported that several sources inside the Ole Miss athletic department were surprised by Smith’s resignation. The Spirit also reported that Smith was given the choice to resign or be terminated.

“They put Mike in a corner,” the anonymous father said. “I’m so disgusted with how college sports are today when things like this happen. Are there things that coaches do that shouldn’t be done? Of course, and they should be penalized for that. But, we are penalizing and ruining a family for no reason.”

Softball America attempted to reach Smith for comment but calls were not returned.

In five years, Smith led the Rebels to an overall record of 187-112. Ole Miss made four Regional appearances, hosting two, and advanced to two Super Regionals under his leadership. They also won the program’s first SEC Championship in 2017.

The 2019 season was one of the most successful to date. The Rebels were ranked as high as No. 9 and finished the season ranked No. 11. They graduated three seniors and gained seven freshmen. Not one player entered the transfer portal in the offseason, making Ole Miss the only SEC program to not lose a player to the portal.

“No one left,” the anonymous father said. “So if it was that bad at Ole Miss then why didn’t anyone leave? So now someone is penalizing the whole team and destroying the whole program. Well, the player isn’t but Johnson allowed it. This program will go backwards five years, especially if they don’t keep Ruben.”

“They let these girls sign a Letter of Intent and the next day placed Mike on administrative leave,” the father said. “Now these girls are held on a scholarship without the coach they wanted to play for. How awful is that? That’s the most deceiving thing that I’ve ever heard in my life. It would be like them getting football players to sign on Dec. 18 and firing Matt Luke on Dec. 19.

“They knew about this well before signing day. That to me is deceiving and dishonest and that is the problem with Johnson (and the University). Zero integrity.”

Transfer Mya Stevenson Ready To Bring Her Power To The SEC

Mya Stevenson transferred from Marshall to Ole Miss in the offseason and is ready to bring her power to the SEC.