KNOXVILLE, Tenn. - The intent of the trip was simply to give Lilli Piper some exposure to a future career.

Ohio State head coach Kelly Kovach Schoenly has made it a program goal for her seniors to leave college with a job.

Schoenly knew Piper was serious about becoming a firefighter, so she arranged for the Buckeyes to visit the local fire station in Columbus in January.

The players and coaches put on firefighting gear, ran through timed exercises and did a search and rescue with the firefighters.

The experience sparked an idea.

Schoenly decided the team’s motto for this season would be “Clear the Floor,” based on how firefighters go floor by floor when they enter high-rise buildings to make sure every floor is clear.

For Ohio State, the floors are each weekend series. The players have to focus on doing their job - no matter how big or small - to ensure the team can advance from each floor as a collective unit.

“For us, it's exposing them to a culture that is so successful. Firefighters and people that do that are just amazing and the way they work for one another is the biggest thing for me,” Schoenly said. “I want our girls to play for one another and be there for each other and not just about stats. It is like the whole group and how we function."

The Buckeyes advanced safely through their first test at the NCAA Regionals on Friday afternoon by defeating North Carolina 1-0 in the opener at the University of Tennessee’s Sherri Parker Lee Stadium.

Senior Morgan Ray threw a complete-game, two-hitter and freshman Ashley Prange executed a perfect squeeze bunt to score the game’s only run as the Buckeyes (35-16) remained in the winner’s bracket.

"I was able to keep my team in the game. I know last week I didn't play my best and I wanted to bounce back and stay there for my team today,” Ray said. “I was just mixing my pitches and going at the batters and it worked out."

Prange gave Ray the only insurance she would need in the sixth inning.

Bri Betschel led off with a double to the right field wall. Piper reached base on a throwing error while advancing Betschel to third base.

After Emily Clark popped out, Prange laid down the squeeze as Betschel raced home without even drawing a throw.

“They called a timeout before Emily’s at-bat, and coach told me to expect it and we might do this," Prange said. "I am just confident with my squeezes too because we have done it before. I just love those moments."

Prange is one of three freshmen who have started since the first game of the season for Ohio State. Schoenly has given them freedom to struggle and learn from any failures.

"Ashley has been one of our biggest clutch performers this year. It's not just the bunts she hits. She plays defense and she is always in the game and she works her butt off to be ready for that moment,” Schoenly said. “It is very fulfilling to see someone prepare at the level Ashley prepares at to have that moment. It gives me chills."

Range has benefited by the prioritizing mindset Ohio State’s “Clear the Floor” motto has instilled.

Every player on the roster receives a time card before Ohio State enters a weekend series or tournament that includes the dates of each game, the opponent and slots to clock in and clock out. 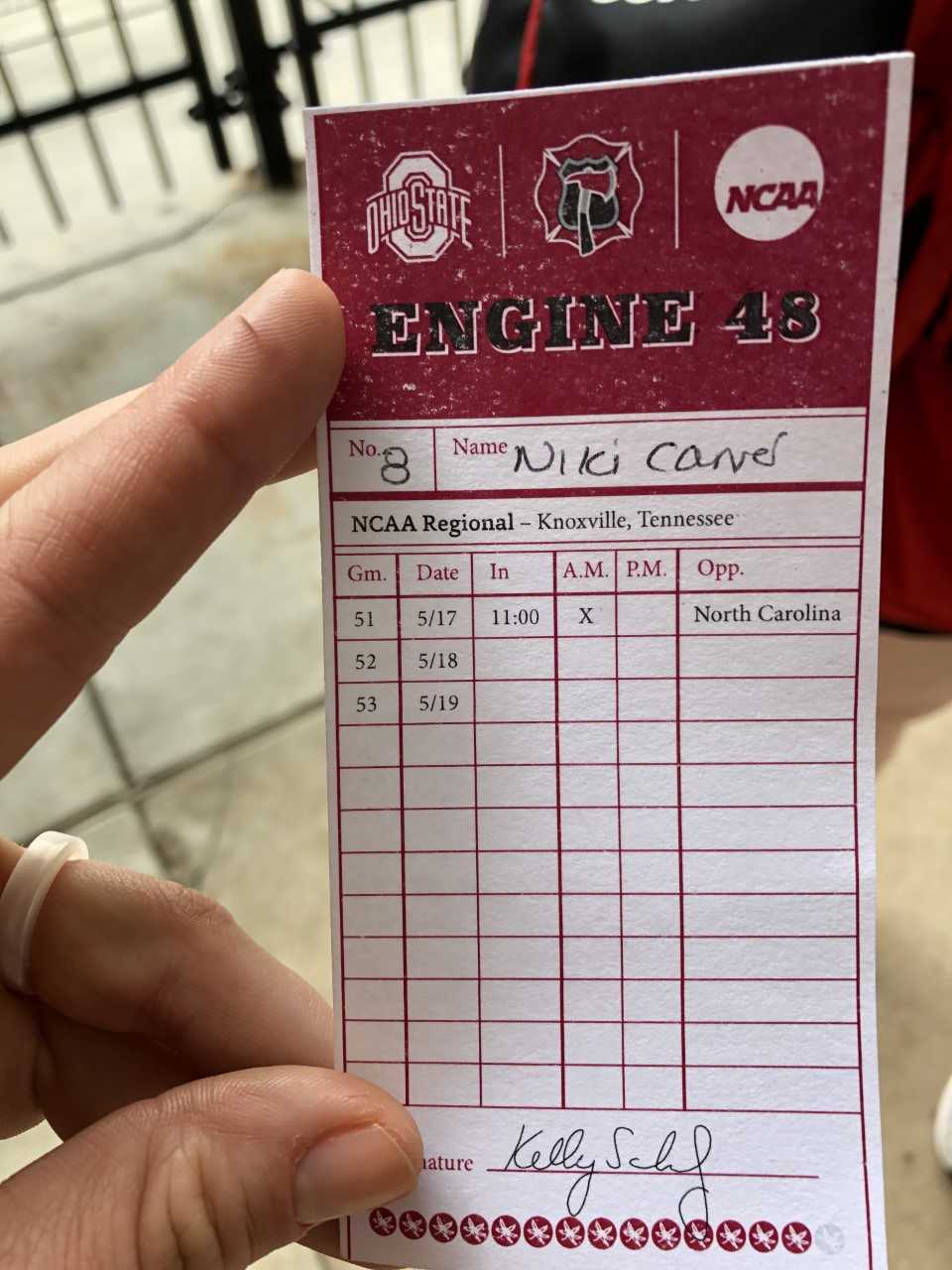 "Coming in as a freshman, you see the long list of teams that you have to play and it can be hard to wrap your head around the entire season,” Range said. “Clearing the floor just allows you to focus on one weekend at a time and clear your mind and be prepared for that one weekend."

Ohio State’s game against North Carolina showcased the value of staying in the present, and understanding how every little detail can add up to a big moment.

After Ohio State’s players punched out on their time cards against North Carolina, they were already mentally preparing for their next shift.

“UNC was the floor to clear and we did,” Ray said. “Whoever we play tomorrow, that is the floor we are going to clear next. That is the goal as a team."

Junior Chelsea Seggern hit two home runs and finished with a career-high six RBIs and freshman Ashley Rogers struck out a career-high tying 13 in her NCAA Tournament debut as Tennessee extended its mastery over Longwood.

The Lady Vols (40-15) have outscored Longwood 35-0 in six meetings, including three in NCAA play.

Seggern, a junior, hit a two-run home run in the third inning and a three-run shot in the fifth, with both landing in nearly an identical spot on the black tarp covering the bleachers in right-center field.

“We just worked all week on our approach and just really trusting that when we got into the box,” said Seggern, who couldn’t recall ever hitting two home runs in the same game before. “I was definitely seeing the ball well and was just really trying to trust that.”

Rogers tied her career-high with 13 strikeouts while allowing only two hits in six innings.
After giving up a single to start the game, the right-hander found her groove and allowed only one more hit.

“The first batter I got behind and she got a hit, so I had to calm myself down and just take a few deep breaths and was just locked in from then on,” Rogers said. “I feel like I did a pretty good job staying locked in and attacking batters from the very beginning.”

Tennessee co-head coach Karen Weekly visited Rogers in the bullpen before the game to gauge where she was emotionally as the Tennessee native prepared for her first NCAA appearance.

“She was loose and she was smiling and I thought that was a good sign because I feel really good about where she has been over the last couple of weeks,” Weekly said. “But regionals is a different ballgame, and everything she is doing is a first for her. So I felt good about her. At the start, when she got behind that first batter and got the hit, I wanted to see how she would respond and she responded like a champ.”

Longwood coach Kathy Riley is very familiar with Sherri Parker Lee Stadium. The Lancers of Farmville, Virginia were making their fourth appearance in a Knoxville Regional.

Although she was disappointed with her team’s performance against the Lady Vols on Friday, she could still appreciate her surroundings.

“I love the atmosphere, and I always love when people come out and want to support their own team,” Riley said. “... To me, that's what it's all about. You go to college, have that college atmosphere and have college athletics be a part of your community and them being able to get engaged with their hometown team. So I'm all about that. I enjoy it, enjoy seeing them come out all the time and their school spirit.”

After transferring from Arizona last year, Ivy Davis has found a great fit at Tennessee.